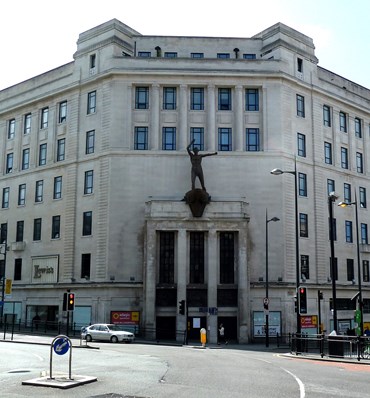 How did the huge, naked, metal man, standing on the prow of a ship, come to dominate one of Liverpool's busiest thoroughfares, and what is his true name?

Directly facing the Adelphi Hotel, at the corner of Ranelagh Street in Liverpool, stands a gracious building that was originally built as ‘Lewis’s Department Store’. This was the fourth store on the site to bear the name of its founder, London-born David Lewis (1823-1885), the first opening in 1856. But, in 1886, the year after its founder’s death, the store was completely destroyed by a disastrous fire. However, this provided the opportunity for the building to be entirely redesigned, developed, and rebuilt.

Business was so good that the store was rebuilt and enlarged again, between 1910 and 1923, by the renowned architect, Gerald de Courcy Fraser (1872-1952). His design incorporated a roof garden, with tame monkeys and parrots, exclusively for the use of Lewis’s wealthier patrons. This was the first large store in Britain to have a fully installed sprinkler fire system, and it was the first shop in Liverpool to use full-size manikins, or dummies, to display clothes in the shop windows. This gave rise to the local expression for a lazy or dilatory person, “You’re standin’ there like one of Lewis’s!”

However, in the Second World War, during the May Blitz of 1941, Liverpool was subjected to almost continuous bombardment by the German Luftwaffe. Indeed, the city was the most heavily-bombed city in Britain, outside London, in sheer tonnage of Nazi incendiary and high-explosive bombs. Lewis’s Ranelagh Street store became one of many architectural and commercial casualties. Nevertheless, the store was completely re-built after the War, by the same architect. This time, De Courcy Fraser designed it with a steel frame encased by a façade of Portland Stone, and it re-opened in 1951.

To appropriately mark the significance of the new store and the continuing resurrection of Liverpool after the War, the sculptor, Jacob Epstein (1880-1959) was commissioned to create a special statue for the front of the building. His instructions were to create something large and imposing that would represent the strength and resilience of the port and city of Liverpool. Epstein took his commission seriously and set to work.

Shrouded in mystery as to the final form of his work, it took Epstein 2½ years to complete. It was then mounted above the grand entrance doors, but remained hidden under massive tarpaulins so that his design would remain secret. Then, on the 20th November 1956, came the official unveiling.

All the ‘great and good’ of Liverpool were assembled on Ranelagh Place, outside the front of the building, along with the staff and management of Lewis’s Stores, and thousands of eager Liverpudlians. There was an expectant buzz amongst the crowds, because word had leaked out that the statue that Epstein had created would be very special indeed. And then the cord was pulled and the great shrouds fell away.

Some loud cheers went up but also great shouts of amazement. Some of these were in shock and outrage whilst others were exuberant shouts of delight! This was because what had been exposed ~ quite literally ~ was the much larger than life-size, blatantly full-frontal figure, of a great, naked, bronze man.

There he still stands, with a determined expression and stance, on the prow of a great ship that seems to be surging out of the front of the building: he is piloting the vessel forward, going boldly into the future! The bronze ship’s prow weighs 2½ tons, and the figure itself weighs a further 2¾ tons. He stands at 18 feet 6 inches high overall, but I have no information about any other dimensions associated with the figure!

Because the statue is cast in perfect and detailed physical accuracy, his sudden appearance in one of Liverpool’s busiest thoroughfares, and above one of its most popular department stores, generated many complaints and letters to the local newspaper, the Liverpool Echo. After a fortnight the reaction died down, although it was said that for weeks after the unveiling the front bedrooms of the Adelphi Hotel were all booked up, and mostly – though not exclusively – by women!

Despite the notoriety surrounding Liverpool’s great, bronze, nude man, I find the attention paid to his manhood somewhat unnecessary; proportionally he is not that impressive, but that it just a personal view! However, whilst the official name of the Lewis’s statue is ‘Liverpool Resurgent’, it is known locally, and for obvious reasons, as ‘Dickie Lewis’! 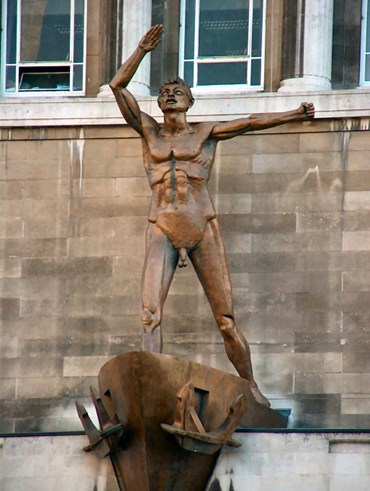