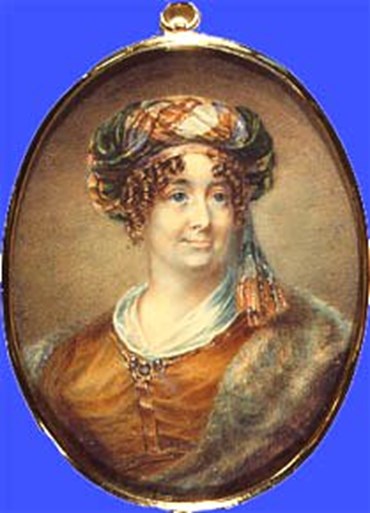 The story of the talented 18th & 19th century painter of miniatures, who was miniature herself.

The very talented painter of miniature portraits, Sarah Biffin, was miniature herself, being only 37 inches in height. She had been born in Somerset, on 25th October 1784, but without arms or hands. She also had only limited use of her legs and feet. Nevertheless, she painted exquisite, tiny portraits, using only her mouth and shoulders and she was also an expert needlewoman.

At the age of twelve her family apprenticed her to a travelling artist called Dukes. He agreed to develop her skills but, in return, she would have to travel with him on a sixteen-year contract, exhibiting her talents in a Freak Show. Sarah ended up in her own show booth, alongside the Fat Woman, the Human Skeleton, and the Pig-Faced Lady, where she signed autographs and painted delicate miniature landscapes.

Dukes charged admission fees for people to watch her sew, paint, and draw, but she also held her own exhibitions, at which she sold her paintings and signatures. Sarah also drew landscapes and painted miniature portraits on ivory, which were sold for three guineas each. But, none of the money she earned was paid directly to her; it all went to Dukes who became very wealthy because of the diminutive artist. Sarah was only paid £5 a year by him.

However, in 1812, her contract expired and so she was able to escape from Dukes’ exploitative clutches. Sarah immediately made her way to London where she was determined to seek her fortune. Here, she set up a studio in Bond Street where she quickly became a popular, fashionable, famous, and highly-respected celebrity. At long last tiny Sarah Biffin began to live a comfortable and secure life.

In 1821, Sarah’s talent was officially recognised when she was presented with a medal by the Society of Arts. She was also patronised by King George III, George IV, William IV, Queen Victoria, and many other titled and illustrious patrons, including the King of Holland. However, she wanted to improve her fortunes further. To do so she recognised that she really should travel to the place that was already being hailed as ‘the most important town in the British Empire’ outside London. So, in 1842, Sarah Biffin came to Liverpool.

Now, and at the age of 63, Sarah held many exhibitions in the Town, including one at the Collegiate School in Shaw Street, in Everton. She continued to paint famous people, including the virtuoso violinist Paganini, on one of his many visits to Liverpool; and Charles Dickens (1812-1870) too, who refers to Sarah in his novels, 'Nicholas Nickleby' and 'Martin Chuzzlewit’.

Sarah finally settled at number 8 Duke Street in the town, and she continued to sell her paintings but, sadly, fashions changed and her fortunes waned. Money ran out, and she became dependent on a pension of £12 a year that had been granted to her by King William IV. The artist’s eyesight began to fail and she became increasingly physically infirm. Fortunately, the wealthy Rathbone family, who were respected local philanthropists in Liverpool, arranged a public subscription that raised enough money to buy Sarah an annuity. Sadly, her illnesses overcame her and, only eight years later, on the 2nd October 1850, she died at the age of 66. Whilst most of her art work was either lost, or is kept in unknown private hands, some of Sarah’s miniatures survive to this day, and they really are quite beautiful.

Sarah Biffin lies buried in St James’s Burial Ground, at the foot of Liverpool’s Anglican Cathedral, but I cannot trace where, exactly, her grave site is located: and I really have searched! However, supposedly inscribed on her tombstone, are the following words,

DEPOSITED BENEATH are the remains of SARAH BIFFIN who was born without hands or arms .....

Few have passed through the vale of life so much the child of hapless fortune as the deceased, and yor possessor of mental endowments of no ordinary kind.
Gifted with singular talents as an artist, thousands have been gratified with the able productions of her pencil, while her versatile conversation and agreeable manners elicited the admiration of all. 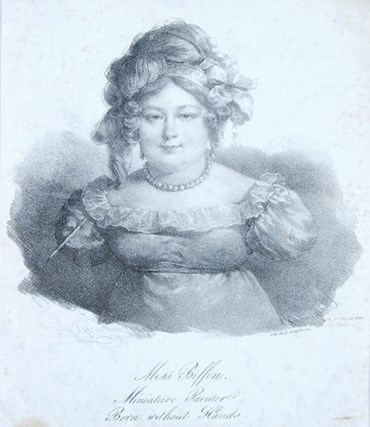