⇧ Back to Local History 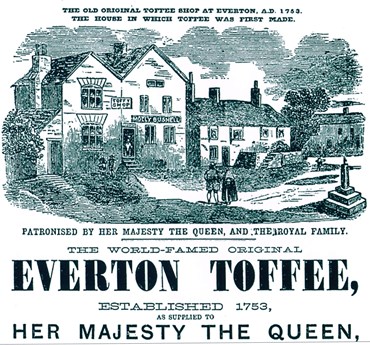 The story of Everton Toffee and the woman who made it, and herself, famous.

Each of the suburbs of modern Liverpool was once a village or township in its own right. Most of these are listed in William the Conqueror’s Domesday Book of 1086, and many pre-date the now great city by many centuries.

One of the earliest of these communities, Everton, was originally a significant rural township standing high on the eastern ridge above Liverpool. Little now remains of ancient Everton Village, except the old village lock-up, standing in what remains of the village green, and two of the original streets, named ‘Village Street’ and ‘Browside’, which once ran through its heart. All of the village’s homes and houses have long-since been demolished, to be replaced by the modern, expansive, landscaped Everton Park. These included a thatched cottage that had been built here around 1690, and which overlooked the village green.

This was the home of a local woman by the name of Molly Bushel (1746–1818) and, from 1753, it was here that she began to make the boiled sweets that she called 'Everton Toffee’. The recipe was not Molly’s own though, it had been given to her by its inventor, Doctor James Gerrard, who was a local physician and Town Councillor in Liverpool. Molly made her toffee in an open oven at the rear of her home, and it quickly became very popular.

The cottage in which Molly began her business stood near to an older and already famous cottage. In 1644, this had been commandeered by Prince Rupert of the Rhine, the nephew of King Charles I (1600-1649). He had used this as his headquarters whilst he besieged Liverpool Town, during the English Civil War. By the time Molly began selling her toffee Prince Rupert’s Cottage had already become a tourist attraction in the village, bringing curious sightseers to Everton from miles around. They would visit the famous building, drink in the local taverns, and picnic on the green with its spectacular views across the Wirral, to Wales, and to the Irish Sea. Now, they could also buy Molly Bushell’s increasingly renowned toffee, and make a real day out!

During the time that Molly lived by the historic cottage, its current occupiers decided to sell off some of the furniture. At the sale, Molly bought the chair that was claimed to have supported the royal bottom of Rupert. Now, as well as bolstering her own buttocks, Molly used this curious piece of furniture to provide her with a profitable sideline to her toffee sales. She now charged her customers a few extra pennies to see and to sit on the significant wooden chair.

Over the years the toffee became much prized, not just by local people but also by the wealthier classes in the area. And so, in 1783, Molly moved across the green into a larger house, standing on Village Street. Here, she converted the lower part of her home into a shop and began to expand her product range.

In the beginning, and for twenty years, Molly had worked alone, but now she enlisted the help of her daughter, Esther, and her cousin, Mrs. Sarah Cooper, and business thrived for the next thirty years. In due course, Everton Toffee became a great favourite with Queen Victoria and her family, who had batches of it regularly shipped to Windsor Castle. Charles Dickens also ordered regular supplies of the sweet.

As Everton began to expand, the centre of life in the village was around the village green and Molly’s toffee shop, and the number of ‘tourists’ now coming to the village began to rise significantly. These people now became souvenir-hunters who pulled chunks out from the walls of Prince Rupert’s Cottage. Eventually, there were so many day-trippers that, in 1787, it was considered necessary to build a local lock-up ‘to house drunks and unruly revellers overnight’. This became a well-known landmark, sometimes called ‘The Stone Jug’, and it is one of only two surviving village gaols in Liverpool; the other being located in the middle of Wavertree Village, to the south of the City.

When Molly Bushell died, in 1818, her recipe, and her goods and chattels, including Prince Rupert’s chair, now passed to her Sarah Cooper, so stayed in the family. Mrs. Cooper continued to make and sell the celebrated and still popular Everton Toffee from new premises on Browside. However, the depredations of the tourists continued to weaken the structure of Rupert’s Cottage and, in 1845, it had to be pulled down. The previous year, and for similar reasons, Molly Bushell’s original cottage and Toffee Shop had already been demolished. Sometime around 1884, the Browside Toffee Shop was also demolished, as was the rest of the street.

Nevertheless, the family had by this time acquired another property and shop, at number 1 Netherfield Road, which was still in the heart of Everton Village. Everton Toffee continued to be sold by them from this address until the late 19th century, when the last of the toffee making dynasty, Clara Bannister, retired. This shop and the toffee recipe were subsequently bought by the confectionary firm, Nobletts, in 1894. They now used the trademark ‘Mother Noblett’, based on an image of Molly Bushell, to sell their version of Everton Toffee.

Nobletts was eventually sold to the famous firm of Barker & Dobson, who first put the distinctive stripes on the individual sweets. This company was eventually bought out by the Taveners sweet company, who continue to sell Everton Toffee. Nevertheless, this company do not claim that their recipe for it is authentic. So don’t assume that the humbugs you now eat when you buy modern Everton Toffees taste the same as the ones that Molly Bushell’s customers would have known!

The Netherfield Road Toffee Shop was also eventually pulled down to make way for new housing, but the Everton lock-up still stands and is now a listed building. It is in excellent condition and well-maintained by Liverpool City Council. Everton Football Club took the image of the lock-up as the central device on its club emblem, and the Club’s nickname remains ‘The Toffees’, after Molly Bushell’s famous toffee. In fact, at the start of every home game the ‘Toffee Lady’ comes onto the pitch. Dressed in 18th century garb she carries a wicker basket. This latter-day Molly Bushell takes Everton Toffees from her basket and scatters them into the crowds. At the end of the game she comes out again, and if Everton FC has lost the match, she weeps; if, however, they have won, she dances a jig!

Interestingly, descendants of Molly Bushell now live at Neston, across the River Mersey on the Wirral Peninsula, and they still own Molly’s original copper toffee-making pan, and Prince Rupert’s wooden chair. 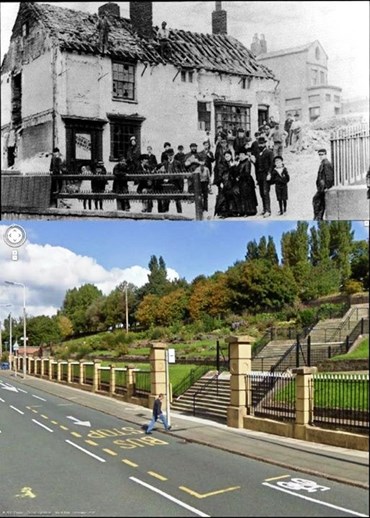