The Widnes and Runcorn Transporter Bridge

The history of the ferries across the Mersey between Widnes and Runcorn, and of the unusual bridging mechanism that was installed to replace this and to solve a special technical problem!

Sometime in the 9th century, the daughter of Alfred the Great, Queen Ethelfleda of the Mercians (c.870-918), built a castle on the shore at Runcorn, overlooking the river across to what is now the town of Widnes. From the reign of King John (1167-1216), a small ferry boat was rowed across the Mersey from Runcorn Gap to Widnes West Bank. The tolls levied for this went directly to the Crown but, if a traveller could not afford the boat ride then, at low tide, he could take his life into his hands and cross the river on foot. Although, he still had to pay a much smaller toll to the Lord of the Manor for the privilege of doing so!

The ferry service operated almost continuously for centuries and a report on it, written in 1835, stated, ‘the public are ferried across by a couple of men, who are not always to be found at a moment's warning; next, the landing-place at Runcorn is at all times extremely incommodious; and thirdly, that on the other side is still worse; in fact, at low water, the passenger here steps out of the boat on a plank, lands on mud and sand, and after walking on this compost upwards of a hundred yards to the ferry-house, he has then a mile to proceed at all events’.

In 1864, work began on the London and North Western Railway Company's impressive Runcorn Bridge. This still carries main-line trains in and out of Liverpool, and is officially named the ‘Queen Ethelfleda Viaduct’. This is because, when it was being built, workmen discovered the foundations of the Saxon Queen’s ancient castle, which had been demolished many years before.

As well as this, an increasing number of vehicles, of all kinds, were now wanting to cross between Runcorn and Widnes and so a road bridge was clearly now required at this point on the river. To meet this need, in 1899, the ‘Widnes and Runcorn Bridge Company’ was formed.

However, to carry coaches and carts across the river and the canal, at a height sufficient to allow ocean-going ships to pass beneath it, meant that any bridge would be very expensive to construct. An alternative was needed, so the company decided that a ‘transporter bridge’ would solve their problem.

A ‘transporter’ consisted of two, tall, iron towers, one standing on each side of the river. These were connected from their highest points by a gantry carrying parallel tracks. A trolley travelled along these, from which, suspended on cables, a large ‘carriage’ moved from one side of the river to the other. The first transporter bridge in the world had been opened, in 1893, in Bilbao, Spain, and this had been followed, in 1898, by transporter bridges in Rouen in France, and in Bizerte, which is now in Tunisia. This meant that the technology was proven and, in 1901, work began on building the Widnes and Runcorn Transporter Bridge.

Work was completed in 1905, at a cost of £130,000 (around £12½Million today), and the massive towers each stood at a height of 180 feet (55 metres). The gantry spanned a distance of 1,000 feet (300 metres), which made this the largest transporter ever built. The carriage, which was more like a giant tea-tray, weighed 250 tons, and was 55 feet (17 metres) long and 24 feet 6 inches (7½ metres) wide. It had been designed to carry ‘four two-horse wagons or 300 passengers’, and there was a shelter for the passengers as well as a cabin for the driver. This was mounted at one end of the carriage, and was tall enough to give him a clear view in all directions.

The journey across took 2½ minutes, and this amazing contraption was driven by electric motors in the trolley, fed from a power house in the tower on the Widnes side. However, the bottom of the carriage passed only 12 feet above the high water level, and only 4 feet 6 inches above the wall that separates the Ship Canal from the River Mersey. This meant that trips across had to be timed to allow ships to pass beneath.

For journeys on the Transporter the tolls were 6d (6 old pence) for carriages, carts, and motor vehicles, and 1d (1 old penny) for foot passengers and animals. These were only increased in 1953, when they went up to 1/- (1 shilling) and 2d (2 old pence) respectively. Despite the volume of traffic that used the bridge it never made a profit, and was run as a public service by Widnes Corporation, who had bought it in 1911.

In the years immediately following the Second World War (1939-1945) the Transporter was carrying an average of 500 cars, 300 lorries and trucks, 100 bicycles, and 4,000 foot passengers every day. By the late 1950s these figures had risen to an annual average of 280,000 cars, 145,000 commercial vehicles, and over 2 million foot passengers, and I remember travelling on the Transporter as a child. This was on outings with my family, in my father’s Ford Prefect saloon car, and mostly to places like Chester Zoo or Delamere Forest. I recall how we shared the journey with great crowds of people as well as vehicles, and sometimes with horses and small herds of cattle or sheep!

But time was running out for the old suspended carriage system and it was becoming overused and overcrowded; it simply could not keep pace with modern transport needs. A fixed, high level bridge now had to built, which opened in 1961 and is now named The Silver Jubilee Bridge. The Widnes to Runcorn Transporter Bridge was demolished soon afterwards, and it has now passed into the mists of nostalgia. 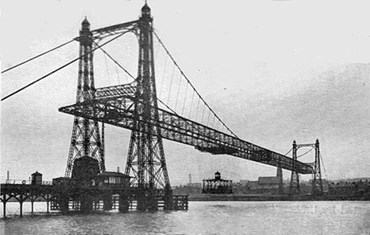