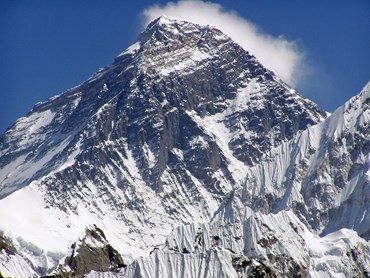 So, did Sir Edmund Hilary and Sherpa Tensing Norgay really get to the top of the world's highest peak first, or was it two lads from Birkenhead?

In June 1924, a British Expedition set off to climb Everest, led by Andrew Comyn Irvine and George Leigh-Mallory. However, and in mysterious circumstances, both men died on the summit of the great peak. Nevertheless, many people now speculate that perhaps Irvine and Leigh-Mallory actually made it to the summit, almost thirty years before Hillary and Tenzing.

Andrew 'Sandy' Irvine was born in Birkenhead, in 1902, and had been educated at Birkenhead Preparatory School and Birkenhead Junior School, from 1910 to 1916. He then completed his education at Shrewsbury School. George Leigh-Mallory was born, in 1886, in Mobberley in Cheshire, and his father was the Vicar of St John’s Church, in Huskinson Street, off Grange Road, also in Birkenhead.

It was at 12.50pm, on Sunday 8th June 1924, that Noel Odell (1890-1987), a member of the Everest Team, saw the distant figures of his companions, Irvine and Mallory, on the North East Ridge of the mountain and within striking distance of the summit. Odell was following his team-mates up the peak and was several thousand feet below them. His task was to prepare the camp for the two climbers, for their return journey, and following what was confidently expected to be their successful conquering of the great mountain.

Odell had a clear view of his fellow climbers but only as tiny specks high above him on the mountainside. Then a great bank of cloud flowed in, completely enshrouding Irvine and Leigh-Mallory and obscuring them from Odell’s view. After the expedition, Odell wrote,

"There was a sudden clearing above me and I saw the whole summit ridge and final peak of Everest unveiled.

I noticed far away on a snow-slope... a tiny object moving and approaching the rock step. A second object followed, and then the first climbed to the top of the step. As I stood intently watching this dramatic appearance, the scene became enveloped in cloud."

This was the last time that Irvine and Leigh-Mallory were ever seen alive. However, and inevitably, the question has remained ever since; did either or both of them make the summit, 29 years before Hillary and Tenzing Norgay? This was never satisfactorily answered and the mystery remained.

Over the years, a number of expeditions have been mounted to try to discover what happened to the ill-fated climbers and, in 1999, on what was the 75th anniversary of this disastrous mountaineering attempt, an Anglo-American team re-traced the route of the 1924 British Everest expedition. They found George Leigh-Mallory's preserved remains, 2,000 feet from the summit.

The body of the unfortunate mountaineer was described as being in a remarkable state of preservation, and was simply lying, partially buried in the snow. They described the exposed flesh of the climber as being, “ivory white, smooth, and hard” and, from the position of the corpse, it seems that he may have fallen. One leg was certainly broken and the shoulder was injured. The implication of this was that Leigh-Mallory may well have lain on the snow following his fall, unable to move, and simply waiting for his inevitable death. However, did the climber die on the ascent or on the descent? Tantalizingly, there was no evidence to confirm whether or not either of the climbers had actually reached the summit of Everest.

But what of his companion? The body of Irvine has not, as yet, been discovered, and there were no signs of him anywhere near Leigh-Mallory’s body. It was known that Sandy Irvine had taken a camera with him on the climb, but neither this nor his body have ever been found. The Birkenhead climber lies there still, somewhere high on the roof of the world amidst the ice, snow, and cloud; perhaps with the photographic evidence that would settle the question once and for all.

George Leigh-Mallory’s remains were left exactly where they were found on the mountain. This was partially out of respect, but also because it would have been far too difficult and dangerous to attempt to bring it down. In fact, the bodies of well over two hundred climbers lie near the summit of Everest; each of these killed in their attempts to reach the top of this formidable and perilous mountain.

So, at least for the time being, the question still remains: were Hillary and Tenzing the first climbers to successfully climb Mount Everest or was it two mountaineers from Birkenhead? Perhaps we shall never discover the truth. However, three roads off Borough Road in Prenton were named to commemorate the intrepid though tragic Wirral climbers; Mallory Road, Irvine Road, and Everest Road. 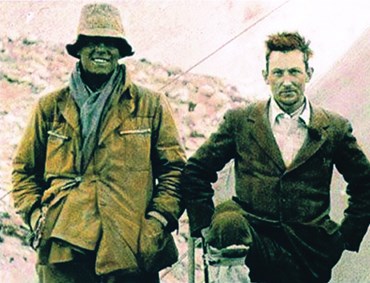